WE humans tend to possess an innate distrust of machines, computers, robots, parking meters, printers and the like.

Both geniuses in their own right, the showdown was set – But how do you make a chess match compelling enough to work on stage? Why fragment it through time of course.

From Alan Turing asking ‘Can machines think?’ in 1950, to the destructive and controlling sentient machines of the Matrix trilogy (Space Odyssey, Terminator, iRobot so on and so forth). From the Luddite movement of the early C19 in which disgruntled workers angrily responded to the influx of machinery, by smashing it all up, to Asahi, the robot bartender (he fetches beer so he’s alright). 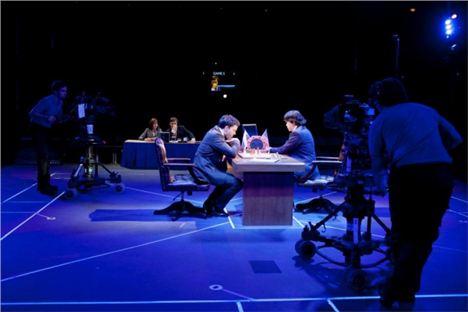 We’ve become worried that machines are going to replace us altogether. Just look at the rampant rabbit.

Will we eventually create a creator and render ourselves obsolete? I think therefore I spam.

Or will we just continue, like Japanese manufacturer Honda, to spend millions on a robot that continues to fall down the stairs like a merry geriatric at Christmas.

Director Josie Rourke and playwright Matt Charman deal with this concept of Man vs Machine and the human drama at its core with the world premiere of The Machine in Castlefield’s Campfield Market Hall for Manchester International Festival. 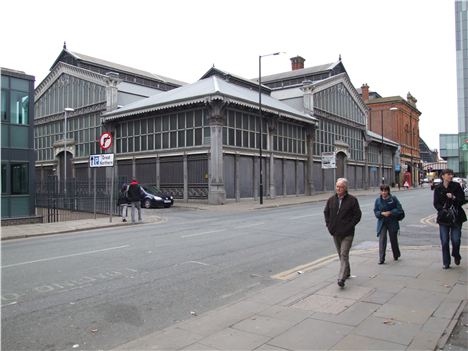 This one: Not the other one

A fantastic if baking venue this one, although finding the right entrance proved troublesome. Having circumnavigated the whole of the MOSI Air and Space Museum, pulling at doors and picking up a rabble of eight similarly confused stragglers on my way, the general consensus was that it must be in the other Market Hall (the one attached to Dimitris and Don Marco), Higher Campfield not Lower Campfield. Some signage please MIF. Even just an arrow. 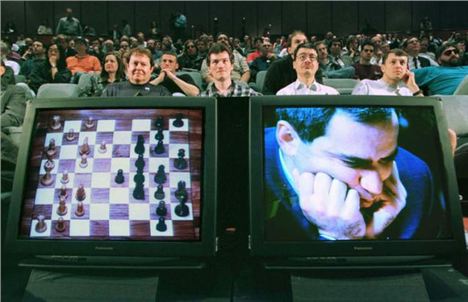 The Machine is set in May 1997. The world’s greatest chess player (and now political activist and thorn in Putin’s side, which is not really a side you want to be thorning), Russian Garry Kasparov went up against Deep Blue, a computer built by Taiwanese inventor Dr Feng-Hsiung Hsu and tech giant IBM, in what was to be the most pivotal chess match of Garry’s life and a critical point in man’s relationship with technology.

But how do you make a chess match compelling enough to work on stage? Why fragment it through time of course.

The Machine begins where it ends, on the competition floor. Through the course of the evening the play hops between pivotal points in the lives of both Kasparov and Feng in the lead up to the match in which both men had staked their reputations. 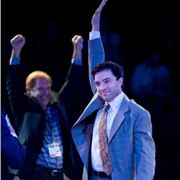 The MachineFrom the game room in New York 1997, the audience is swept back to a Botvinnik Chess School in the early seventies, through Carnegie Mellon College computer labs, dorms, gymnasiums, bars in the eighties, from Dallas to the grounds of a wealthy Russian estate near St Petersburg.

Granted, simply watching Kasparov play a computer at chess would be as interesting as going out on the drink with Ed Miliband or playing Windows Minesweeper circa 1992 (did anyone ever know how to play that?), but I’m afraid the constant hop hopping around draws the play out too much. It's about 20-30 minutes too long. Strategically chopping or combining a few scenes could have avoided this.

For the most part though, the play is a compelling watch. The showdown is set up more like a boxing match than a game of chess, including the overly zealous American compere. The players spar off against each other, with each move more ballet than boardgame.

There’s a few fluffed lines here and there spread amongst the cast, and you can taste the slightest hint of over-acting in some scenes, but Hadley Fraser’s portrayal of the obsessive and intense nature of Kasparov’s character is masterful (not once does he drop the harsh Russian tongue). While Kenneth Lee’s transition from a bumbling and awkward techy dork to undauntable stubborn genius (still a dork) is a convincing one. 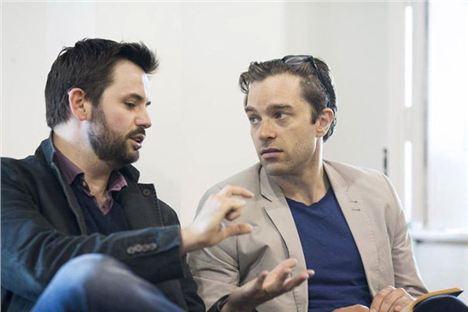 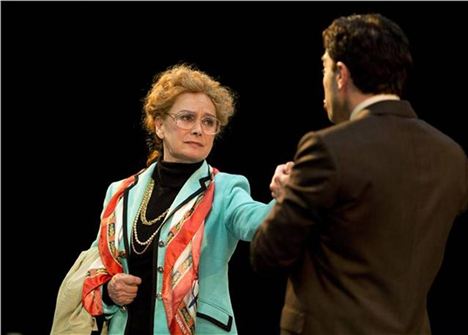 For a play that is essentially about the machine, a computer that mysteriously remains hidden throughout (a fact that nearly sends Garry over the edge), the story paradoxically boils down to the human aspect, a battle between two men. Two foreign geniuses pitted against one another in New York.

The desire, the struggle, the obsession, the distrust, the drama, the controversy, the psychosis, the need for something more – in Garry’s case it’s a better life away from oppressive Russia, for Feng it’s the strive to “always be better, always be faster.”

The staging by Josie Rourke and designer Lucy Osbourne is very canny, sat in a four-sided mini arena structure (not unlike the Royal Exchange), the audience are placed right on top of the action.

From four alleyways on each side of the stage performers dart in and out, some wheeling in camera equipment, others are wielding tables of computers and chessboards indicating a shift in scene and time. Hefty screens hang above the action like NBA basketball scoreboards, giving us fleeting close-ups and live video coverage. The technicality of it all is very impressive.

At points all the cameras, screens and surveillance aimed at Garry becomes almost Orwellian as his paranoia and IBM’s puppeteering grows. I wonder what George would have made of the whole affair.

But is the rise of the machine inevitable? Or is it something less sinister, is it, as Clara shrewdly points out, "all about selling computers."

Better send an inflated Austrian Cyberdyne T800 back to 1997 - just in case.

From £12 until 21 July. All information and tickets for MIF avaliable here.