Oldham Metrolink To Open In January

The new line will incorporate four new stops on the Victoria to Rochdale line: Westwood, Oldham King Street, Oldham Central and Oldham Mumps, the latter of which will integrate tram and bus services and provide a new free park-and-ride site for passengers. 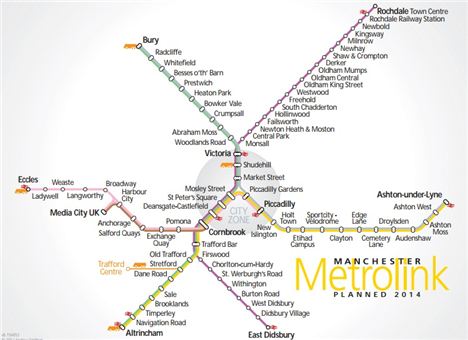 Proposed Metrolink 2014 (according to Project Mapping)

There will be disruptions to services with a week long closure of the existing line between Central Park and Rochdale station. That closure is scheduled to start on Saturday 18 January with details of replacement bus services appearing early in the new year. Metrolink updates here.

The old Oldham Loop line was closed to train services in October 2009 for conversion to the Metrolink. In its last year around 1.2 million journeys were made on the line, compared with the 2.5 million journeys made in the first full year of the tram line.

Councillor Andrew Fender, Chair of the TfGM Committee, said: “The arrival of Metrolink in Oldham has already been a huge success story – patronage is already double that of the former rail services – and we’re now in the final stages of completing the next chapter. The town centre line is a cornerstone in the rejuvenation of Oldham and has been the catalyst for some very exciting developments.”

Jim McMahon, Oldham Council Leader, said: “Having our new Metrolink line open will mark an important new chapter in our history and this news is an excellent early Christmas present for the borough.

“We fully recognise that the construction process has been hard for many people – especially businesses. Councillors Dave Hibbert and Shoab Akhtar have worked in very difficult circumstances to support them through these works and we want to thank them all for their patience."

If progress goes to plan it will be the third new Metrolink line in a row to arrive ahead of schedule.