THIRTY-five years ago, a large sector of British society was politically charged and active.

By active, that did not mean tut-tutting over a copy of Chavs while waiting for the Ocado delivery, nor spending Thursday nights swanking around on Twitter, posting  #BBCQT hashtags every time Russell Brand opened his gob.

Back then it was about feet, voices and ideas, united class struggles. If people of every background weren't out manning the lines at Greenham Common or rallying in their hundreds of thousands for the right to work, they were frequently watching and making political theatre in pubs and clubs. Happy-angry days.

Whole companies were set up with this very mandate at heart, like 7.84 and Red Ladder, and they made thought-provoking dramas like Sus, revived this week in Liverpool.

Set on Election Night, 1979, Sus is a play about what happens when police powers go unchecked. It centres on the interrogation of Leon Delroy, a young black man, in the aftermath of a woman’s suspicious death. With the incoming Thatcher government set to bring a ‘New Dawn’ of hard-line law enforcement, Karn and Wilby - Delroy’s interrogators – sense a golden opportunity to make names for themselves; all they have to do is get the first murder confession of the new regime. Whatever it takes.

The play written by Barrie Keeffe (who also wrote The Long Good Friday), received critical attention at the time for its depiction of police harassment under the controversial 'Suspicious person’ (‘sus’) laws which enabled police to detain and interrogate people without evidence that they had been involved in any criminal activity."

But did it change anything? Thirty five years on, black people are still seven times more likely to be stopped by the police than white people, with only about one in 10 of those stops leading to an arrest.

Or as producer Ed Barratt points out, despite the age of the play, very little has needed to be updated "unfortunately".

He told Liverpool Confidential: "Numbers are hard to come by; but with the largely spurious linking of the new stop and search powers to terrorism, there may well be more young black men being stopped and searched now than ever before. Even the Home Secretary has admitted that 250,000 street searches were carried out illegally last year." 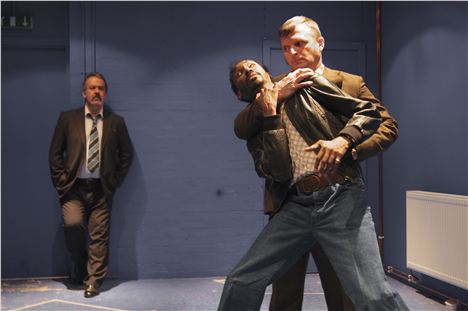 He added: "The play is 35 years old, and I can't find figures going back that far; but the annual number of black and ethnic minority deaths in police custody or through other contact with the police has remained fairly constant in the last 25 years, with over 130 deaths occurring in that time."

Sus is to be staged by the emerging Liverpool-based Enthusiastic Theatre Company, supported by the Arts Council and METAL, for whom this represents their first fully-professional production.

The cast of the three-hander sees Delroy being played by Nolan Frederick, Wilby by Nigel Peever and Liverpool’s very own Alan Stocks as Kam.

The below five performances commence at 8pm, at The Black-E, 1 Great George Street, Liverpool, L1 5EW

The two perfomances below are aimed specifically at those for whom a £10 theatre ticket might simply be out of reach, and commence at 8pm, at The Casa, 29 Hope Street, Liverpool, L1 9BQ.